Jan 22, 2016 Donald Trump
LYNCHBURG, VA. (PRWEB) JANUARY 18, 2016 Liberty University kicked off the Spring 2016 semester with one of its most heavily attended Convocations to date, featuring a tribute to Dr. Martin Luther King Jr. on his birthday and a speech from presidential candidate Donald Trump. Trump is a billionaire real estate mogul and reality television personality (from NBC’s “The Apprentice”), as well as a best-selling author (including “The Art of the Deal”). Students, back from Christmas break, displayed a renewed enthusiasm during a spirited time of praise led by the Liberty Campus Band. Senior Vice President for Spiritual Development David Nasser then commended the student body for their service. Through the LU Send Now initiative, Liberty students responded to the aftermath of tornadoes in Mississippi, and even while away from school. Liberty partnered with Samaritan’s Purse to send the volunteers, who were publically recognized during Convocation. A video of the trip was also shown. Liberty also took time to celebrate the legacy of Dr. King, who shook the nation with his peaceful, yet bold, call for love, respect and unity among Americans — no matter the color of their skin. A video honoring his legacy was played in the Vines Center. Dr. King’s daughter, Bernice, spoke at Liberty in 2009. President Jerry Falwell then welcomed students back to campus, and recognized the countless guests in attendance. He noted that as an institution, Liberty does not endorse anyone for political office and invites all presidential candidates to speak in Convocation. In the past year, Ted Cruz, Bernie Sanders, and Ben Carson have spoken in Convocation, and Jeb Bush was the 2015 Commencement speaker. Falwell said that since Trump spoke at Liberty in 2012 before a record crowd, he and Trump, as well as Trump’s staff, have stayed in touch. The Liberty president talked about the many sides of the successful real estate investor that the media does not get to see. Falwell shared touching stories of Trump’s generosity in helping struggling businesses and families, as well as those affected by 9/11. Echoing his 2012 description of Trump, Falwell introduced him as “one of the greatest visionaries of our time.” “Donald Trump has stunned the political world by building an unlikely coalition that crosses all demographic boundaries,” Falwell said. “Donald Trump is a breath of fresh air in a nation where the political establishment from both parties has betrayed their constituencies time and time again with broken promises and a continuation of the status quo. … Donald Trump shuns the censorship that is rooted in political correctness and speaks the plain, common sense truth that so many have been longing to hear.” (Read Falwell’s full speech.) In December, during an appearance on Fox News’ “Hannity”, Falwell compared Trump to Liberty founder Dr. Jerry Falwell because both men were willing to stand up for what they believe is right. Falwell also pointed out that Trump could have ridden comfortably on his business and television success but chose to run for office — and risk the scrutiny that comes with such a campaign —because of how much he cares for his country. As Trump made his way to the stage, the Republican front-runner was welcomed to the world’s largest Christian university with a warm standing ovation. “Get those teleprompters out of here,” Trump said in his slick New York drawl, promising plenty of the off-the-cuff, blunt rhetoric for which he is popular, “we are going to have some fun.” He shared his amazement with Liberty’s miraculous story of growth from its founding in 1971 to today. “Liberty University is like a rocket ship, a really great rocket ship,” he said. “You are going to have amazing futures, absolutely amazing futures.” Trump spotlighted the legacy of Dr. King, acknowledging him as “a great man.” He dedicated the event’s massive turnout — over 11,000 with thousands more watching in satellite locations and online — to King. Delivering on his reputation, Trump, light on his feet, pulled no punches as he addressed what he sees as the issues that have diminished America’s greatness. Trump’s statements on national defense, protecting the Second Amendment, and honoring veterans drew the loudest applause. Trump called for unity among Americans, especially Christians, citing Liberty as an example of what can be accomplished when people join together. “We have to band together; we have to do … what they have done at Liberty. Because Liberty University has done that. You have banded together and you have created one of the great universities, colleges, anywhere in the country, anywhere in the world. … Our country has to do that around Christianity.” Trump also shared some wisdom with the students. “You can never, ever give up,” Trump said. “I’ve seen people over the years … who were phenomenal students, brilliant, but they didn’t have that drive, they didn’t have that stick-to-itiveness, and they didn’t make it like other guys who were not as good and not as smart. So you’ve got to never, ever quit, or give up. And go into a field that you love … if you don’t love what you do, you are never going to be successful.” Freshman Kaylee Martin, who is studying digital media, said that this was a great way to begin the semester. “It was an honor to be a part of this, to hear him in person,” Martin said. “It is great that we go to a school where we can hear from these (candidates), so we are informed. And not just on the Republican side, on the Democrat side as well.” About Liberty University Liberty University, founded in 1971, is the largest private, nonprofit university in the nation, the largest university in Virginia, and the largest Christian university in the world. Located near the Blue Ridge Mountains on more than 7,000 acres in Lynchburg, Va., Liberty offers more than 500 unique programs of study from the certificate to the doctoral level. More than 200 programs are offered online. Liberty’s mission is to train Champions for Christ with the values, knowledge, and skills essential for impacting tomorrow’s world. 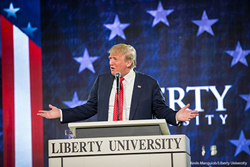