Feb 25, 2016 Bernie Sanders, Donald Trump, Hillary Clinton, Marco Rubio, Ted Cruz
Ted Cruz Voted Winner of 6th GOP Presidential Debate by New York Metropolitan Republican Club with Just One More Vote than Trump. Blockchain Voting Process Worked Flawlessly. (PRWEB) FEBRUARY 25, 2016 One week before the Super Tuesday March 1 primary, a statewide poll of likely voters puts Ted Cruz and Hilary Clinton as winning their respective party primaries in Texas. Voters in both major parties placed the economy among their top concerns, although immigration was the top concern for likely GOP voters, and education placed a close second in the minds of likely Democratic voters. The Texas Pulse, a periodic survey of Texans’ opinions on a variety of cultural, economic and political issues, was jointly conducted by Crosswind Media & Public Relations and The Austin American-Statesman from February 19-22, using a survey of 1,031 Texans. The margin of error is +/- 4 percentage points among likely GOP voters and +/- 5 percentage points among likely Democratic voters. Among the 620 likely Republican voters polled, 38 percent give Ted Cruz the nod, versus 26 percent for Trump. This is a significant reversal from the results of the September Texas Pulse poll which showed Cruz trailing Trump (15 percent versus Trump’s 26 percent). Marco Rubio’s popularity among voters increased from just three percent in the September poll to 13 percent this month. As the field narrows, Cruz and Rubio have benefited, while Trump, with universal name recognition and high awareness from the beginning, has shown less ability to grow his coalition, remaining stagnant at 26 percent. The top issue among Republicans remains immigration. It was 50 percent among Republicans in September and is 46 percent today. Nonetheless, it seems to be a secondary driver of GOP voters, with only nine percent of GOP voters citing border security as the main reason they chose the candidate they did. This trails behind “ability to change Washington” at 36 percent, which closely mirrors the Cruz result, and is in keeping with Cruz’ message. The diminished role of immigration as a determinate of vote also helps Marco Rubio, who has trouble with the most conservative GOP voters on that issue. Among the 411 likely Democratic voters surveyed, Hillary Clinton remains strong in Texas, with a 40-point lead over Bernie Sanders, 66-26 percent, an improvement from September’s poll when she led 55-21 percent. Clinton leads in all categories, with her strongest support again coming from huge margins among African-Americans (70-16 percent) and Hispanics (72-21 percent). Clinton also leads among young voters (54-37 percent) and does significantly better than Sanders among women (68-24 percent). The top two issues for Democratic voters in Texas are the economy and education. Health care is only an issue for 14 percent of Democrats, possibly reflecting satisfaction following President Obama’s health care reforms. “One of the reasons we do these surveys, in addition to taking the pulse of our home state, is to inject the Lone Star State’s posture into the mix of what is happening nationally,” said Thomas Graham, Crosswind president and CEO. “Coming off other state primaries, media reporting can seemingly add to one candidate’s momentum over another’s. “We’ve learned that Texans’ decisions do matter,” Graham added. “It’s not ‘how other states go, so goes Texas.’ Presidential candidates of either party would do well to pay attention to what is happening in Texas.” Issues Important to Texans While immigration has remained a consistent issue of concern among GOP voters, it has shrunk just slightly in importance among both parties since September’s poll – down from 50 percent among Republicans and from 10 percent to seven percent today among Democrats. Graham noted that the survey didn’t query voters on immigration perspectives, such as tightening border security, versus legalization measures. “It’s likely that the GOP and Dems are looking at the issue of immigration from two entirely different perspectives,” he said. The state economy has moved up as a concern in the minds of Democrats at 29 percent, replacing health care as these voters’ top concern last September. The economy again comes in as the second priority among Republicans, mirroring the September figure of 18 percent. Taxes and spending was the only other double-digit concern among likely GOP voters, at 13 percent. Health care (8%) and Education (5%) round out Republicans’ top five issues. On the Democratic side, however, education ranked high on voters’ list of concerns, at 26 percent. Health care (14%), social issues (12%) and immigration (7%) round out the Dems top five list, with taxes closely following at 6 percent. Perceived Candidate Strengths Not only did the economy rank out health care this time around as a top Democratic concern, but the ability to manage the economy was chosen as the top reason for why those voters named their candidate of choice, at 27 percent. GOP voters, on the other hand, expressed frustration with the status quo in Washington, citing their candidate’s perceived ability to change how things are run in our nation’s capital as their top reason (36%). Overall, the poll has a 95 percent level of confidence, meaning that if an identical survey was conducted under the same circumstances, it would generate a result within the same margin of sampling errors 19 times out of 20. A 2014 Texas Pulse survey was recognized by the Houston Chronicle as the most accurate poll in the governor’s race. Crosswind will release the complete findings of the latest Texas Pulse on February 29. To receive a copy or for more information visit http://www.crosswindpr.com/texaspulse/ or email Crosswind Vice President James Bernsen at jbernsen(at)crosswindpr(dot)com. 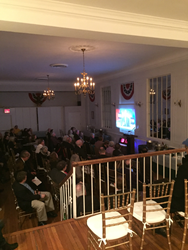