Mar 4, 2016 Ben Carson
Survey shows that more older Muslim voters back Clinton, while younger Muslims support Bernie Sanders SANTA ANA, CA (PRWEB) MARCH 04, 2016 During today’s CPAC address Dr. Ben Carson will announce he has agreed to serve as National Chairman of My Faith Votes, a non-partisan 501(c)(3) educational organization (http://www.myfaithvotes.com), leading a movement for a singular purpose: to motivate the 25 million Christians in America who are registered to vote, but who chose not to vote in the 2012 election, to vote in the upcoming elections. “Nothing is more important to me than my personal faith, and it is my faith that motivated me to be involved in the political process to begin with,” said Dr. Ben Carson. “I believe Christians in this country can easily determine the next president of the United States and all other national and local leaders, should they simply show up at the polls. When we do vote, We The People will once again solidify our commitment to the Judeo-Christian values upon which our nation was founded.” Anchoring the My Faith Votes mission will be a national media campaign – throughout all 50 states – that will intensify as the November election nears. The movement, which has received the endorsement of a number of the most significant Christian leaders in America, seeks to awaken millions of Christians across America to act upon their civic responsibility this November. “In the last four presidential elections, an average of less than five million votes separated the major candidates.” said Sealy Yates, President of My Faith Votes, “yet more than 25 million Christians didn’t bother to even show up at the polls in 2012. We are committed to making sure that every Christian in America is engaged in this election cycle.” On the same day Dr. Ben Carson signaled the suspension of his presidential campaign, he agreed to assume the role of National Chairman of the My Faith Votes movement. “We could not be more thrilled with Dr. Carson’s involvement,” said Johnnie Moore, spokesperson for the My Faith Votes movement. “Dr. Carson is a truly inspirational figure who embodies the values of the Christian community in this country. His involvement in our movement has the potential to literally activate millions of Christians, re-engaging them in political process whomever they choose to support.” note: http://www.myfaithvotes.com ### 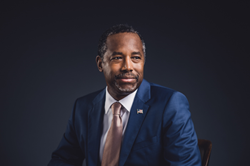