More People Will Vote For An Independent In Trump vs. Clinton Race, According To A New Survey Being Conducted In America's Bars And Night Clubs

Apr 4, 2016 Donald Trump, Hillary Clinton
EYE Play Poll Shows Slightly More Americans Side With Pope Over Trump On Immigration NEW YORK, NEW YORK (PRWEB) APRIL 04, 2016 A new EYE Play political poll conducted in bars, clubs and high-energy venues across the United States shows that in a Donald Trump versus Hillary Clinton race, 40 percent of people would rather cast a ballot for an independent, unknown or other candidate. Clinton trailed Trump by approximately six percentage points. Almost 7,000 respondents participated in the survey via touch screen digital jukeboxes by EYE Play, powered by AMI Entertainment Network, one of the country’s largest digital place-based networks. The results show voting trends based on location, age, education, political affiliation and ethnicity. Over 60 percent of respondents were male. Almost half of the respondents have a college degree or higher. When asked about immigration, approximately 52 percent of voters feel that the Pope’s position on the subject is correct, while 48 percent agree with Donald Trump’s stance. More than half of white participants agreed with Trump on immigration, whereas 73 percent of Hispanics and 59 percent of African Americans polled sided with the Pope. “People from across the country with differing educations, ages, political affiliations and ethnicities opted to answer questions while in an entertaining public setting. They may have been watching a debate with an opinionated crowd, relaxing with colleagues or listening to music with friends,” says Jeff Gunderman, CEO of EYE Corp Media, an out-of-home media solutions company. Even with Trump and Clinton leading the primaries, two out of five people are still undecided on who they will vote for in November. Forty-one percent of white Republican males age 50 – 65 who live in the Northeast will support Trump, according to the poll. Twenty-two percent of respondents who live on the West Coast will vote for Trump. Clinton led Democratic votes by almost 38 percent. The most important issues to voters at this time are the economy, followed by terrorism, gun control, healthcare, immigration and unemployment. Thirty-two percent of millennials agree the economy is a top political concern. When asked what the primary resource is for getting political news updates, 35 percent said TV, 23 percent said Internet, 13 percent from social media and apps and 14 percent from an “other” category. EYE Corp Media: EYE Corp Media delivers flexible Out-Of-Home media solutions for advertisers by targeting audiences in local communities where they shop, dine, commute and play. Follow on Twitter @Eyecorpmedia or Eye Corp Media on Facebook. Survey Methodology: One of the country’s largest digital place-based networks, EYE Play, powered by AMI delivers strategic campaigns on digital jukeboxes using static, full motion and interactive touch screens in over 23,000 bars, clubs and high-energy venues. The EYE Play political poll officially launched network wide on March 11th. To date, almost 7,000 surveys have been taken with approximately 2,354 surveys having been fully completed. For additional survey results or questions, please email rchappa(at)chappacommunications(dot)com. ### 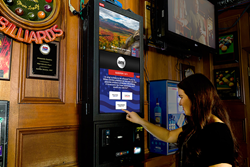