New book is about hard-fought campaigns in two political parties, process that culminated in Donald Trump’s victory ALEXANDRIA, VA (PRWEB) JANUARY 26, 2017 Many books are written about presidential campaigns after the fact, but JD Foster thinks they often lack the flavor of the moment, the immediacy of events. Histories may also not recognize in hindsight a related current event that deeply influenced a candidate or the public’s perceptions, he added. Foster believes that a chronicle of events as they happened provides an appreciation of how the events were perceived and how they influenced the candidates and the campaign. This belief led him in writing “2016: The Campaign Chronicles: The Journey to Trump” (published by Xlibris). The 2016 presidential contest was the most fascinating, most bizarre campaign in memory. This book attempts to chronicle the campaign’s events fairly so Americans today and historians tomorrow have a guide to understanding how a non-politician of apparently zero prospects became the 45th president of the United States. “Polls consistently show Americans believe the country is on the wrong course. They have voted for change in presidential election after presidential election, yet they routinely and overwhelmingly re-elect their own Congressmen and Senators,” Foster says. “Understanding something of the 2016 election may help in understanding this inconsistency and thus may shed light on at least some of the nation’s divisions. In many ways, some deeply disturbing, the 2016 election offers a mirror’s reflection of the state of the nation, an image of where we are and thus perhaps a clue to where we are going on our current course.” “2016: The Campaign Chronicles” is not a book about Donald Trump. It is about the hard-fought campaigns in the two political parties. It is about the process that culminated in Donald Trump’s astounding victory. “2016: The Campaign Chronicles” By JD Foster Hardcover | 6 x 9in | 970 pages | ISBN 9781524576516 Softcover | 6 x 9in | 970 pages | ISBN 9781524576509 E-Book | 970 pages | ISBN 9781524576493 Available at Amazon and Barnes & Noble About the Author JD Foster has worked in Washington, D.C. since 1985. During this period, he served in senior positions for a combined six years in two White House agencies and also spent four years working in senior positions for a number of U.S. senators and congressmen. Most of the rest of the time, he has worked at various Washington think tanks on a wide variety of economic policy areas. Xlibris Publishing, an Author Solutions, LLC imprint, is a self-publishing services provider created in 1997 by authors, for authors. By focusing on the needs of creative writers and artists and adopting the latest print-on-demand publishing technology and strategies, we provide expert publishing services with direct and personal access to quality publication in hardcover, trade paperback, custom leather-bound and full-color formats. To date, Xlibris has helped to publish more than 60,000 titles. For more information, visit xlibris.com or call 1-888-795-4274 to receive a free publishing guide. Follow us @XlibrisPub on Twitter for the latest news. 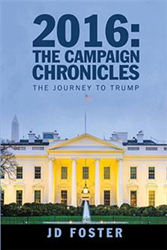 http://www.prweb.com/releases/2016TheCampaignChronicles/JDFoster/prweb14017161.htm Note: We are not responsible for typo error, price change, substitute item, or available of item from online ads.]]>