Voters also split on whether to legalize marijuana for medical purposes only or for recreational use. BOSTON, Jan. 12, 2018 — A new Emerson College ePoll finds President Trumps approval rating among registered voters slipping after one year in office to 39%, with 52% disapproving of his job performance. This is down from a February 2017 Emerson’s poll where the President held a 48%approve/47% disapproval. However, the drop in approval has not affected his base and their support. When voters were asked if they would change their vote if they could do it over again 12% of 2016 Trump voters said they would change their vote, while 10% of Clinton voters said the same. Within this subset of voters willing to change their vote, it breaks for Trump with 24%, with 20% breaking for Clinton. This difference is well within the subsets margin of error. The poll looked at a series of issues including President Trumps Signature Tax plan. Overall, 41% of voters are not supportive of the tax policy that goes into effect in February, while 34% support the plan. The issue of a potential immigration compromise was explored regarding funding for the wall in exchange for approving DACA and again voters were more likely opposed to the policy 44% to 37%. A popular issue for the President is sanctuary cities. Overall 47% oppose sanctuary cities, while 35% support. There is a clear partisan divide on the topic, with Democrats in favor of sanctuary cities, 51%-30% with Republicans in opposition 63%-26%, and Independents opposed 51%-28% making it a potential wedge issue in 2018 and beyond. The issue of Marijuana policy found 43% supported recreational legalization while 38% supported only Medical legalization. 16% would like Marijuana to stay totally illegal. On the issue of mental stability of the President, the results were split with 43% saying Trump was mentally stable and 45% saying he was mentally unstable. When asked who they thought was more truthful, registered voters leaned toward the news media at 55% and to the President at 45%. These results are contrary to what the findings of the Emerson poll in February 2017 which found the President was more truthful. The Democrats appear to have an opportunity to capture the U.S. House and Senate, in a generic ballot test for the 2018 midterms, Democratic candidates are preferred (45%) and Republican Candidates (40%). In a hypothetical 2020 Democratic primary, Joe Biden (27%) and Bernie Sanders (23%) are leading the field of candidates for their party nomination, with Elizabeth Warren in third (9%). Registered voters were also asked if they thought race relations had improved or worsened in the last year, 15% said it had improved, while 51% said it had worsened. While this ratio held for Caucasians, African-Americans, and Asians – Hispanic had a different view with 36% saying things had improved and 37% saying things had worsened. The National Emerson College poll was conducted January 8-11, 2018 under the Supervision of Professor Spencer Kimball. The sample consisted of only registered voters, n=600, with a margin of error (MOE) of +/- 3.9 percentage points. The data was weighted by 2016 vote, age, ethnicity, party affiliation and mode of data collection. Data was collected using both an Interactive Voice Response (IVR) system of landlines only and an online panel provided by Survey Sampling International (SSI). Emerson College Polling Weekly is the official podcast for the Emerson College poll. The podcast is available on iTunes, Stitcher and the CLNS Media Mobile App. Visit our website at http://www.emersoncollegepollingsociety.com. Follow us on Twitter @EmersonPolling. Media Contact: Peter Hall 188704@email4pr.com 617-824-3491 SOURCE Emerson College Polling 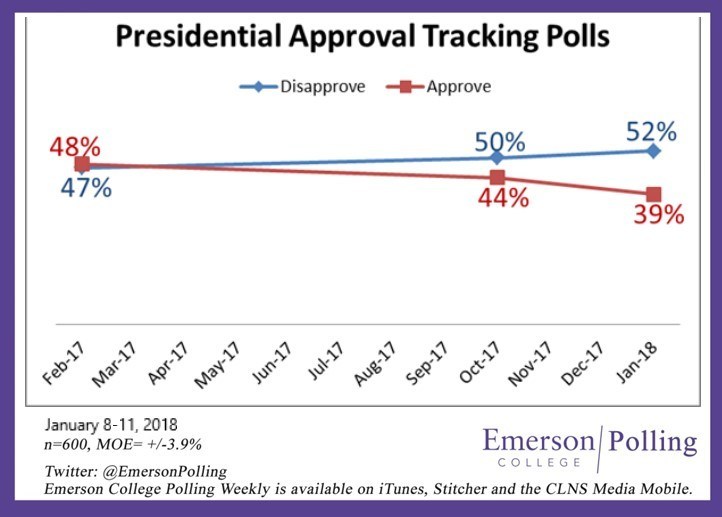