SACRAMENTO, Calif., Aug. 3, 2018 /PRNewswire/ — Today, Republican candidate John Cox confirmed his participation in the We Stand With Seniors/KGTV ABC10 gubernatorial debate in San Diego this fall. The debate will be broadcast statewide and is co-hosted by We Stand With Seniors… Will You? and KGTV ABC10, in partnership with the California Broadcasters Association (CBA). “We commend John Cox for being a part of this debate and letting voters know where he stands in addressing the critical issues facing our older population and their families,” said Shelley Lyford, president and chief executive of West Health. “For far too long issues like affordable housing, access to healthcare and caregiver support have been ignored in this state. This is an opportunity for candidates to share their plans, so voters can make the right decision in November.” The Golden State faces a looming crisis. By 2030, nearly one-fifth of the state’s population will be over the age of 65, yet the state is woefully unprepared to care for this rapidly growing demographic. Fortunately, statewide surveys show that voters see and understand the widespread implications of this crisis and want California’s next governor to tackle it head-on by creating a master plan for aging. “We are thrilled John Cox has committed to #StandWithSeniors by agreeing to participate in the We Stand With Seniors/KGTV ABC10 debate. Despite older adults making up more than half of likely voters, it seems candidates and policymakers have historically ignored their needs. This debate will finally allow candidates to publicly address the challenges faced by California’s older adults, families, and caregivers and share their ideas for solutions,” said Bruce Chernof, MD, president and CEO of The SCAN Foundation. The We Stand With Seniors/KGTV ABC10 debate provides an unparalleled opportunity for voters to see where the candidates stand on a number of issues that directly impact their lives. The campaign is partnering with CBA to make the debate available statewide to its member stations. We Stand With Seniors looks forward to working with Lieutenant Governor Gavin Newsom’s campaign to confirm his participation as well. About We Stand With Seniors West Health and The SCAN Foundation’s We Stand With Seniors… Will You? nonpartisan, public awareness and education campaign focuses on the specific challenges seniors and their families face in accessing high-quality, affordable healthcare, dental care and supportive services and the cost to the state if these challenges are not addressed. Keep up with #StandWithSeniors by visiting www.WeStandWithSeniors.org and following on Facebook @WeStandWithSeniors and Twitter @WeStandWSeniors. SOURCE We Stand With Seniors Related Links http://www.WeStandWithSeniors.org 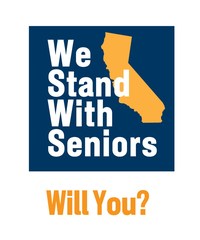