BOSTON, Oct. 23, 2018 /PRNewswire/ — Outvote, the app that helps voters get their friends to the polls announced a partnership today with Vote.org to launch a nonpartisan version that lets you remind your phone contacts to check their registration status, find their polling place location, and go vote.
(PRNewsfoto/Outvote Inc.)
(PRNewsfoto/Outvote Inc.)
Outvote has demonstrated that SMS from known contacts is significantly more effective than door-to-door canvassing, the previous gold-standard for verifiable voter turnout. Now Outvote has taken the same technology used in their partisan app for Democrats and made it available to everyone with the new Vote.org app.
“This November, reminding your friends is your new civic duty,” says Outvote founder Naseem Makiya. “We’ve long admired the work that the team over at Vote.org has done to inform and empower voters, which is why we’re so excited to join forces.”
In studying its effect on the 2018 primaries, Outvote found that a single SMS from a known contact made people 10% more likely to vote, compared to 8% for a typical canvassing conversation. This allows Vote.org app users to effectively perform 2 hours of canvassing in 5 minutes, from anywhere.
“Texting your friends is going to play a major role in turnout for the midterms this year,” said Debra Cleaver, founder of Vote.org. “Our partnership with Outvote allows us to provide voters with a free and easy to use platform to get out the vote to their friends and family right from their phone. We’re excited to be working with the Outvote team and our new Vote.org app is going to get a lot of people voting who may not have otherwise.”
The Vote.org app is available to download on both iOS and Android.
Vote.org:
Vote.org uses technology to simplify political engagement, increase voter turnout, and strengthen American democracy. Vote.org works to ensure that the electorate accurately reflects the population in terms of racial, gender, and income diversity.
Vote.org launched in 2016. Since then, over 14 million people have visited the Vote.org website, and the organization has proactively reached out to an additional 10 million voters. Vote.org is a 501(c)(3) nonpartisan nonprofit, with a reputation for running research driven and cost-effective turnout campaigns.
Outvote
During the 2016 election, Outvote founder Naseem Makiya saw the long-overdue need to modernize political campaigning. After spending some time pounding the pavement for local campaigns, Makiya was inspired to develop a technology that could scale the effectiveness of 1:1 interaction on the campaign trail. It became clear that when you combine the ease of digital messaging with the trust of one’s own network, it is possible to scale highly-effective personal outreach. With this idea, and a little refinement from the Silicon Valley startup incubator, Y Combinator, Outvote was launched. Outvote has since partnered with top-tier organizations like MoveOn, Swing Left, Flippable, Vote.org, and Democratic State Parties. You can follow Outvote on Twitter, Facebook, and Instagram or visit Outvote.io for additional information.
Outvote is available for iPhone and Android.
Media Contact
press@outvote.io
SOURCE Outvote Inc.
Related Links
https://www.outvote.io/ 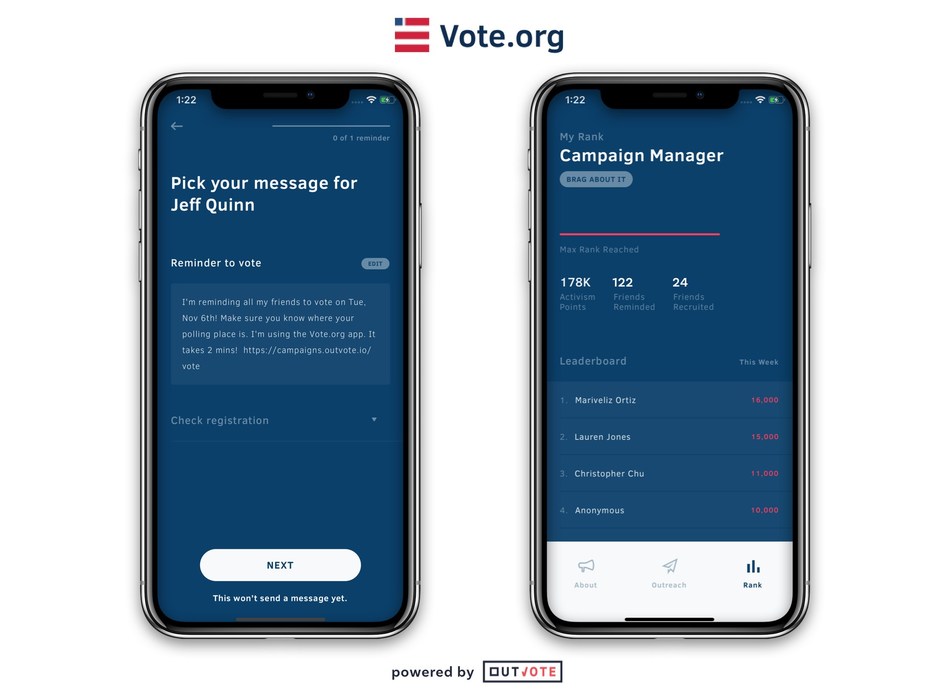