Emerson College National Poll: Trump’s Disapproval Matches All Time Low; Americans Are Optimistic About the New Year Despite Belt Tightening for the Holidays BOSTON, Dec. 12, 2018 /PRNewswire/ — The last Emerson Poll of 2018 finds President Trump job disapproval rating fell below 50% for the first time this year in an Emerson poll, with approval at 43% and disapproval at 47% on his job performance. These are his strongest job numbers for the President in an Emerson Poll since February 2017, when Trump had a 48% approval/47% disapproval. This survey data was collected December 6-9, US Residents, MM, n=800, +/-3.6%. Looking to the New Year, Americans are positive: 47% expect that 2019 will be better than 2018, with 30% saying things will be worse next year. However, the poll also found that a plurality of Americans (42%) plan to spend less this holiday season than last year. 27% plan to spend more and 31% indicate they will spend the same amount as last year. About a quarter of Americans (24%) consider there to be a war on the word “Christmas”, while 51% said there is not. National Politics After gaining over 40 seats in US House races in November, the poll found a tightening in the Generic Congressional ballot test at 46% Democrat and 44% Republican. In the Emerson poll around Columbus Day in October, Democrats led 50% to 42%. A Generic Presidential ballot test forecast a similar 2020 race with what was predicted in 2016, with 45% currently leaning for the generic Democrat and 43% for the generic Republican. Even with the turbulence of his presidency, a majority (56%) of GOP voters surveyed do not believe a Republican candidate should challenge President Trump in the 2020 Presidential Primary. 25% believe a Republican candidate should challenge President Trump. On the Democratic side, six candidates were presented to likely primary voters, with former Vice President Joe Biden (26%) and Senator Bernie Sanders (22%) leading the field. Beto O’Rourke at 15% was the only other candidate to reach double digits. Biden is popular among baby boomers, aged 55-74, with 39%. Bernie Sanders has the support of those aged 18-34, with 36%. Regarding the issue of potential voter fraud in the 2018 Midterm Elections, the Emerson Poll found overall people split, with 41% of Americans believing there was voter fraud, while 38% did not believe fraud took place in the recent election. By party, 47% of Democrats said there was fraud, and 30% said there was no fraud. Among Republicans, 35% believed there was voter fraud, while 44% said there was no fraud in the election. Flu Season As the country enters flu season, the majority of Americans (51%) said they did not get the flu vaccine this year. Among those polled, a majority of 55-74 year olds (65%) and those over 75 (62%) got a flu shot this year, as compared to only 35% of 18-34 year olds and 44% of 35-54 year olds. When asked why they did not get a flu shot, 53% said that it simply was not a priority for them. Methodology The national Emerson College Poll was conducted December 6-9, 2018 under the Supervision of Professor Spencer Kimball. The sample consisted of registered voters, n=800, with a Credibility Interval (CI) similar to a poll’s margin of error (MOE) of +/- 3.6 percentage points. The data was weighted by gender, age, party affiliation, region and mode. Data was collected using both an Interactive Voice Response (IVR) system of landlines only (n=560) and an online panel provided by Amazon Turk (n=240). Visit our website at www.emersonpolling.com. Follow us on Twitter @EmersonPolling Media Contact: Andrew Cassidy 617.824.3491 206313@email4pr.com SOURCE Emerson College Polling Society Related Links http://www.emersonpolling.com 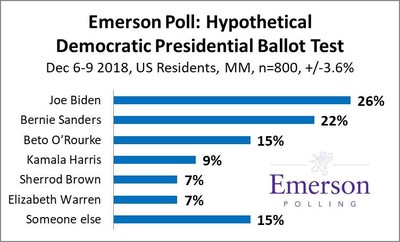