SACRAMENTO, Calif. – April 2, 2019 – PRLog — Democratic presidential candidate Marianne Williamson will participate in a CNN Town Hall on Sunday, April 14 at 7:00 p.m. ET in Washington, DC. CNN’s Dana Bash will moderate questions from the live audience.
An author, activist and entrepreneur, Marianne Williamson has been helping people heal from the problems created by politicians and the impact of their bad policy on average American’s lives for more than 30 years. She has been on the forefront of personal, spiritual, and political ideas and actions for more than three decades and has written 13 books, four reaching # 1 on the New York Times Best Sellers List. Marianne has founded numerous non-profits, including Project Angel Food which started delivering meals to homebound AIDS patients in 1989. Since then, the organization has served 11 million meals. With more than 3.7 million followers on social media, Marianne has a dedicated and committed base ready to support this presidential campaign.
“It is time for a revolutionary change in how government works. We need vision and understanding of the whole human and how we live in community,” said Williamson.
Since announcing her candidacy on January 28, 2019 in Los Angeles, Marianne has been traveling the country, meeting people, lecturing and writing about how to help them make their lives better. She has a unique and important perspective needed in our next President.
“The problem with American politics is that it doesn’t get to the heart of the matter. We need to face our level of corruption, by which our government serves the interests of a small economic elite before the interests of the people. We need to face the level of our systemic racism. We need to face the number of our neglected, chronically traumatized children. And we need to face our failure to wage peace and stand up for democratic and higher human values around the world,” continued Williamson. “The good news is this: once we do those things, then we will have breakthroughs the likes of which we cannot now even imagine. We are good and decent people; the problem is that too often our government’s behavior is not aligned with that goodness. And it is up to us to intervene now. A better version of same old same old will not break the pattern, or fundamentally transform us.”
Campaign Video: Marianne Williamson for President 2020
Website: www.marianne2020.com
Twitter: @marwilliamson
Photo(s):
https://www.prlog.org/12762719
Press release distributed by PRLog
SOURCE Marianne 2020
Related Links
http://www.marianne2020.com 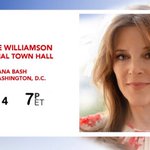