SAN FRANCISCO, May 6, 2019 /PRNewswire/ — Americans for Common Ground, a 501c4 founded to create bipartisan solutions to our most pressing political problems, announced today the launch of Vice.run, a national political initiative to reclaim the rights of American voters to democratically elect the vice-presidential candidates. Vice.run begins its national 50-state campaign today, collecting signature pledges from voters who support a change in the current party ballot process. The mission: reclaim our constitutional right to democratically elect the vice president by creating separate ballot lines for vice presidential candidates in the 2020 election, as per the 12th Amendment. Vice.run will secure signature pledges to use standing ballot access laws in each state to initiate this change.
“For too long, Americans have lived under the misperception that presidential nominees have the right to handpick their running mates. That’s simply not the case,” said Vice.run co-founder David Blake. “Neither the nominees nor the parties have any constitutional claim to the vice presidency. The 12th Amendment makes it clear: that right belongs to We the People and calls for a ‘distinct list’ and a ‘distinct ballot’ for the election of the vice president. Vice.run will restore the people’s right to the vice presidency.”
In a national poll of registered voters, 53% said they would prefer a more democratic approach to choosing the vice president, allowing the public to vote for the VP on a separate line from the president. Put another way, a majority of Americans are unhappy with the status quo, which leaves the choice in the hands of the presidential nominees alone.
“We elect only two people at the national level: the president and vice president. It is simply unacceptable that Americans have lost the right to choose 50% of our national leadership,” said Blake. “This solution has been hiding in plain sight. Our initiative works within existing law to reclaim one of our constitutional rights and put the power back in the hands of the people.”
How it works:
Our goal: 865,000 signatures. Each state requires a certain number of signatures to put an independent presidential candidate on its ballot. In 2016, those state signature requirements added up to roughly 865,000 nationwide. We’re using that number to guide our signature pledge goals in each state. Once we reach our goal, we will engage with secretaries of state to create a vice presidential ballot line.
Visit the map on our homepage to view your state’s vote threshold.
Updating our ballots: Currently, voters see a single ballot line for president and vice presidential candidates on Election Day. When voters check the box for their presidential candidate of choice, his or her running mate is simply listed alongside as a package deal. The Vice.run initiative will correct for party ballot traditions to follow political process as it is outlined in the 12th Amendment—giving voters a separate and distinct vote for President and for Vice President.
Pledge your signature today: Voters can sign the online pledge for their home state (where they are registered to vote), to add their name to the cause and help amass the necessary number of signatures.
Join our grassroots efforts: Vice.run will be launching a national tour this Summer to build public support, traveling state by state to gather signatures and get out the word about the initiative. The tour will be focusing on college campuses across the U.S., expanding out to the swing states throughout the summer months.
Why this matters now
In times of divided government, the office of the vice president matters. Vice President Mike Pence has cast a historic number of tie-breaking votes in the Senate—more than any other vice president since 1841. He is the deciding factor in policies that impact the lives of every American. It doesn’t stand to reason that the vice president holds enormous power and influence over our democracy, yet the job is not subject to democratic input.
“The vice president is uniquely suited to be a solution for our era of divided government,” Blake added. “With a hand in both the executive and legislative branches, the vice president checks the powers of each. But this balancing role only holds if the vice president is a democratically elected official representing the will of the people. It’s time to elect the VP.”
Utah Hits State Signature Pledge Threshold; All 50 States Pledging
Vice.run is pleased to announce that as the national grassroots campaign begins, our initiative has already secured enough pledged signatures in the state of Utah to begin our work towards ballot access in 2020. Since the launch of the Vice.run site, we are proud to announce that we have secured online signature pledges from voters in all 50 states.
To learn more about the Vice.run initiative and add your signature pledge please visit https://vice.run.
Vice.run in the News
CBS News
The San Francisco Chronicle
CNBC
Yahoo Finance
About Vice.Run
Vice.run is a national political advocacy initiative seeking to secure independent ballot access for the vice presidency in the 2020 election. This 50-state effort is rooted in the fundamental right bestowed upon American voters by the 12th Amendment to elect their president and vice president. Through the collection of signature pledges from registered voters that support a more democratic process, Vice.run will help Americans reclaim their rights at the ballots on Election Day.
About Americans for Common Ground
Americans for Common Ground is a 501c4 non-profit organization founded by David and Mikel Blake to help solve the partisan crisis in politics. The mission of Americans for Common Ground is to help create bipartisan solutions to our biggest problems.
SOURCE Vice.run
Related Links 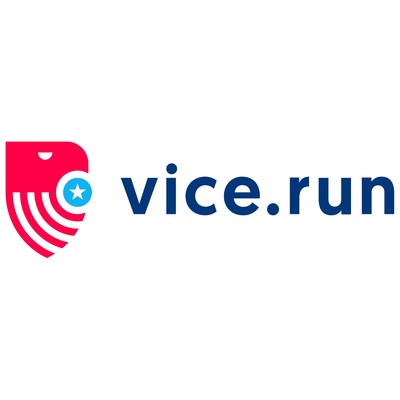