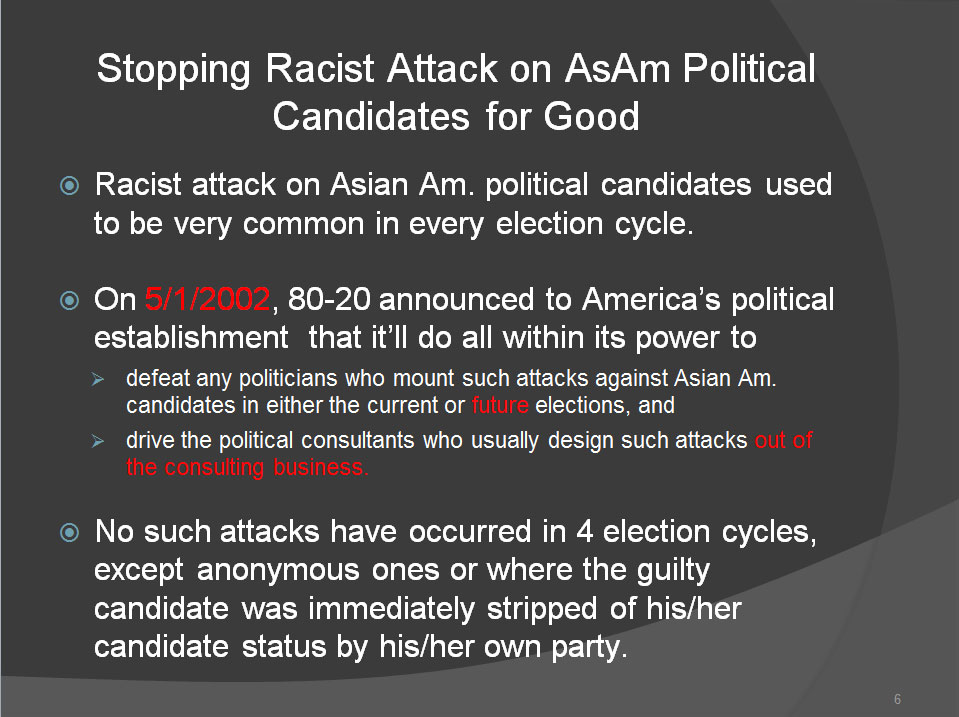 If 80-20 didn’t exist, how might your life be different? Remember when racist attacks against Asian Am. candidates were common? Did you feel safe in an environment with attacks against Asian Americans airing on TV, radio, or in newspapers all the time? Remember the Daisy Ad? (See 80-20’s 10th Achievement from 3/24/11.) Without 80-20, not only would there be a lot fewer successful Asian Am. office holders, but all Asian Am.’s will suffer from facing racist attacks in the media constantly. Racist attacks are mounted in an election campaign, because they are effective! Only when no one dares to amount such attacks, for fear of reprisal by 80-20 PAC, will AsAm candidates have equal chance to succeed. That is Group Political clout! Why is 80-20 PAC so effective? Exaggeration? While the candidates who mount such attacks are the apparent bad guys, 80-20 has the unique political knowledge to know that such attacks are normally designed by the political consultants. The political consultants want a good win-loss record to further their future business. Hence, the hypocritical ones often tempt candidates to mount such an attack against an Asian Am. whose community is known to be meek. The consultants ease their conscience by saying the following to their candidate-clients, “We only advise you how to win. You decide whether it is the right or wrong thing to do.” Often, the candidates can’t resist the temptation; the vile deeds would be conceived and delivered. Normally, the vile candidate and consultant count on the fact that once the election is over, all is forgotten. 80-20 knows that to stop such attacks for good, it must hold both accountable and haunt them forever for their vile deeds — till the candidate is defeated and till the consultant will be driven out of the consultant business. In terms of political effectiveness, there is a big difference between a PAC like 80-20 and Asian Am. office holders e.g. senators, congress- persons, and governors. The office holders don’t dare touch the tough issues because they fear the repercussions in their next elections, although they have much resources under their commend. Only a political action committee dares to tackle the REALLY TOUGH ISSUES, because a PAC doesn’t face a re-election in the mainstream society. 80-20’s top accomplishments are examples of tough issues that it dared to tackle while Asian Am elected officials remained silent. That is not t 464 he fault of AsAm elected officials. That is the nature of American election politics — there are issues that only a PAC dares to tackle. The Asian Am. community must have the wisdom and generosity to support both office holders, who are important to us in the long term, and at least one well-funded national PAC. We await YOUR verdict for 80-20 PAC to either DOUBLE or DIE on March 21, 2013. To join or donate, go http://www.80-20initiative.net or send your check to      80-20 PAC     P.O. Box 603     Osprey, FL 34229. Respectfully yours, A volunteer http://www.80-20initiative.net ]]>