Skip to content
<![CDATA[]]>
Trump Wins 4th GOP Debate. Blockchain Apparatus Conducts Straw Poll Using New Blockchain Technology To Ensure Results Are Transparent and Auditable NEW YORK (PRWEB) NOVEMBER 11, 2015 Blockchain Apparatus scored Tuesday night’s Fox Business / WSJ GOP Presidential Debate at New York’s Metropolitan Republican Club in a post-debate watch party straw poll. Trump won the vote with 14 votes, but Cruz was very close behind trailing by only one with 13 votes The poll was a follow up to earlier polls at the club also conducted by Blockchain Apparatus after the CNBC, CNN, and Fox News GOP debates. The voting technology employed utilizes the blockchain—the technology underlying the security of the digital currency Bitcoin. This allows the company to conduct secure, tamper resistant elections by using the blockchain as a high-tech audit trail to ensure voting records are transparently verifiable and all votes are unique. Speaking on an earlier straw poll conducted by Blockchain Apparatus, manager of the Metropolitan Club, Jeff Goolsby said: “I think what they bring to the voting process is the future of free and open elections.” Executives with Blockchain Technologies Corporation say the company will continue to showcase its voting technology throughout the 2016 election cycle. Participants in the poll were asked: “Who do you think won tonight’s debate?” Out of 56 participants, 14 voted for Trump, 13 for Cruz, and 10 for Rubio. Fiorina got 9 votes and Paul came in with 6. It was a very close debate for all candidates. Below are the official results from the Metropolitan Republican Club’s 2016 Fox Business / Wall Street Journal GOP Presidential Debate straw poll: Donald J. Trump 14 Ted Cruz 13 Marco Rubio 10 Carly Fiorina 9 Rand Paul 6 Jeb Bush 2 Ben Carson 1 John Kasich 1 Blockchain Apparatus is a wholly owned subsidiary of Blockchain Technologies Corporation. They are working to bring modern technology and transparency to the election process. The company has filed a non-provisional utility patent titled ‘System and Method For Securely Receiving And Counting Votes In An Election’ – Application #14820530. For more information visit blockchaintechcorp.com or contact press(at)blocktechcorp(dot)com 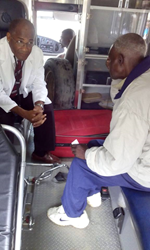