“Election Fraud In America Past And Present” from Christian Faith Publishing author Damon Slone examines the problem of election hacking from the present-day issue of Russian influence to the routine fraud committed by US politicians. Supported by extensive criminal investigations and research undertaken over years, Damon Slone explores how US politicians and their backers manipulate the election process to achieve victory for themselves at the expense of everyone else. WEST PALM BEACH, FLA. (PRWEB) MARCH 12, 2018 “Election Fraud In America Past And Present”: explores how US elections have been continually interfered by US politicians and others. “Election Fraud In America Past And Present” is the creation of published author, Damon Slone. Damon has been a public servant for over forty-eight years. His career started back in 1968 when he joined the Wayne County Civil Defense Search and Rescue Squad. On March 2, 1972, he became a Huntington Police Officer and one of the first thirty-eight EMTs in West Virginia. On June 28, 1988, he was forced to retire from the Huntington Police Department due to a line-of-duty injury to his shoulder and back. In late 1988, he was contacted by a former Captain of the Huntington Police Department, who asked him if he would like to work as the Chief of Criminal Investigation for the West Virginia Secretary of State. In January of 1989, he was interviewed by Ken Hechler and offered the position, which he accepted. In March of 2001, he was released from his duties by the new West Virginia Secretary of State. In March of 2005, he joined the Rome Volunteer Fire Department in Proctorville, Ohio. In 2014, he was injured during a fire when a building collapsed on him and four other firefighters. Due to his injuries, he stepped down from the rank of Lieutenant to finally retire in October, 2016. “Can we ever have a completely honest election when politicians over see the elections, politicians investigating the violations, another politician prosecutes these allegations, while another politicians over sees the trials? Only if more than twenty five percent of registered voters show up at the polls and exercise their constitutional rights to choose our elected officials will we start to over come the election fraud in America.” –Damon Slone After Damon Slone witnessed the news coverage on Russia’s interference in the US election process, he felt compelled to tell the rest of the story. He wanted to know if they had tried to interfere in the 2008 and 2012 election as well. He wanted to know if other countries had tried to do the same. He wanted to know how politicians and their supporters had been able to interfere the US election system on a regular basis. When only a few people vote in an election, it does not take much undue influence to swing an election. Above all, he wants to know why more politicians are not facing criminal prosecutions for election fraud. In “Election Fraud In America Past And Present,” Damon Slone explores whether voting fraud is myth or fact. Based on twelve years of real investigations into election fraud in West Virginia, along with other State investigations, reports by investigative journalists, and other sources, Damon Slone looks at how dead citizens continue to somehow complete their voter registration forms and vote. He investigates how politicians and their supporters buy votes as well as why some citizens will not vote unless they are paid. He reveals how votes are stolen through earlier voting and absentee ballots. He also unveils the abusive campaign finances regularly utilized. View a synopsis of “Election Fraud In America Past And Present” on YouTube. Consumers can purchase“Election Fraud In America Past And Present” at traditional brick & mortar bookstores, or online at Amazon.com, Apple iTunes store, or Barnes and Noble. For additional information or inquiries about “Election Fraud In America Past And Present”, contact the Christian Faith Publishing media department at 866-554-0919. 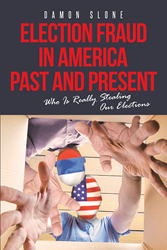