Virginia’s candidates for U.S. Senate, incumbent Sen. Tim Kaine and challenger Corey Stewart took the stage at Liberty University’s Center for Music and the Worship Arts Thursday night for a Town Hall event. LYNCHBURG, VA. (PRWEB) SEPTEMBER 21, 2018 Fifty Liberty University students sat on the stage at Liberty University’s Center for Music and the Worship Arts Thursday night to wait for their chance to question the two main contenders for Virginia’s U.S. Senate seat, incumbent Sen. Tim Kaine and challenger Corey Stewart. The U.S. Senate Town Hall was hosted by Mark Spain, a news anchor for WSET, and Len Stevens, Liberty’s executive director of External Communications. The event was sponsored by Liberty’s Center for Law & Government and Hampton University’s Center for Public Policy. The universities have teamed with the Virginia Association of Broadcasters to provide two Town Hall events and broadcast them live throughout the commonwealth; the next one is scheduled for 7-8 p.m. Oct. 3 at Hampton. (Watch the event on Liberty’s Facebook). About 500 people attended Thursday’s event. Each candidate answered direct questions from Spain before answering questions from the students. A wide range of topics was covered, centering on mostly domestic issues that affect Virginia and the nation. Candidates answered questions on Supreme Court nominee Brett Kavanaugh, allegations of Russian collusion in the presidential election, abortion, tax plans, health care, the national debt, immigration, gun safety, ensuring jobs for college graduates, preserving historical monuments, and more.The students had some definitive views about their experience as part of a televised political event. “I found it interesting,” said Emmanuel Cuffee of Norfolk. “Before this year, I haven’t been interested in politics. I decided to give it try. It was definitely eye-opening. Anytime I think of politics I want to face the questions.” Aaron Sodczak of Hampton Roads said he enjoyed the idea of involving students in the event. “It was really good to hear the students’ point of view,” he said. The Town Hall is the latest in a string of televised political events held on LU’s campus. Liberty hosted the Virginia GOP gubernatorial debate in April 2017 and the Republican primary debate for U.S. Senate this past April. With a $1 billion campus transformation in the past decade, Liberty’s state-of-the- art facilities have attracted high-profile events. For years, LU has brought in a diverse array of world-renowned speakers to its Convocations, giving students opportunities to engage with experts from many different fields as part of the learning experience. Liberty University, founded in 1971, is the world’s premier Christian university, the largest private, nonprofit university in the nation, and the largest university in Virginia. Located near the Blue Ridge Mountains on more than 7,000 acres in Lynchburg, Va., Liberty offers more than 600 unique programs of study from the certificate to the doctoral level. Over 300 programs are offered online. Utilizing its world-class infrastructure and Christian faculty, Liberty’s mission is to train Champions for Christ with the values, knowledge, and skills essential for impacting tomorrow’s world. 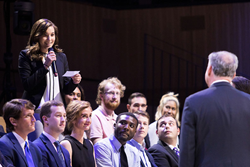