January 2, 2019 Mayor Bill de Blasio: Good morning, everybody – a very Happy New Year to all. So, we’ve got a couple of things to do today, and first is legislation that I want to thank the City Council – hold on, this chair seems kind of low, there we go – thank the City Council for passing. You know, back in November the people of this city overwhelmingly approved a referendum to change our campaign finance system, to get big money out of our local elections, and to empower everyday New Yorkers who give small donations and really strengthen them by adding to the ability of those donations to be matched with public matching funds. So, we already had a very good campaign finance system to be clear, but we needed to go farther. We needed to more aggressively get big money out of politics, we needed to more aggressively empower low donors, everyday New Yorkers, and ultimately create a situation where candidates could run for office in this city and never have to talk to a big donor because they could fund their campaigns solely with grassroots contributions and public matching funds. We’re finally at that point. We’re finally at a point of real reform and change in this city, and the people overwhelmingly supported it. The City Council did something very important, however. They recognized that the referendum did not make clear that the immediate special election, which now has emerged for Public Advocate, should be covered by those same exact rules. And I want to thank the Council for recognizing the need to add legislation to clarify that point which is what’s before us here today. So, it’s Intro. 1288 and it takes the changes that were made in the referendum in November and puts them into law immediately for the special election for public advocate and all special elections and regularly scheduled elections that will occur in 2019. I want to thank the Executive Director of the Campaign Finance Board, Amy Loprest, and her team for working with us on this legislation, obviously Speaker Corey Johnson, and Council Member Ben Kallos who sponsored Intro. 1288, and Council Member Fernando Cabrera, the Chair of the Government Operations Committee. Thanks to all of them for recognizing this need and acting on it so quickly. And again these reforms, these additional reforms will be in place immediately for the Public Advocate elections, all other elections in 2019, and beyond. I want to now invite any members of the public – and we have just only one member of the public – Towaki Komatsu to speak to this piece of legislation. […] With that said, there’s no other public testimony, so, I will now sign this legislation into law. […] This legislation is now law. And now, for the second part of today’s activities, I want to – actually, I’m sorry I have failed to say a few words in Spanish about that. Let me just do that really quickly on the previous. My apology – [Mayor de Blasio speaks in Spanish] Now, with that, I want to turn to this proclamation. And this is to formally set the date for the Public Advocate election. Now, the law provides us a very limited window in which to achieve this election. The Public Advocate – then Public Advocate Tish James, now Attorney General – resigned on December 31st. That activated the window of time in which we could have the special election to fill that very important seat. By signing this proclamation, I am declaring Tuesday, February 26th, 2019 to be the date of the Public Advocate election. We chose this date to maximize voter participation. This was the latest date available under the legal limit that also would fall on a Tuesday that was not a vacation day, was a regular work day. This obviously means that we’ve got just over seven weeks until this election. We’ve got a lot of work to do get the word out. Special elections are always a challenge. We know this. They get less attention for better, for worse. They get less attention than regular elections do. The Public Advocate’s office – I can attest from personal experience – is an important role. It’s important that the people of this city focus on this election. Over these next weeks, we’re going to work very hard to inform New Yorkers about the election, to make sure they participate, and make sure they recognize how important it is to the future of this city. Just a few words in Spanish on that – [Mayor de Blasio speaks in Spanish] With that – […] Alright, the day of the election is set, and that concludes today’s hearing. Thank you, everyone. pressoffice@cityhall.nyc.gov (212) 788-2958 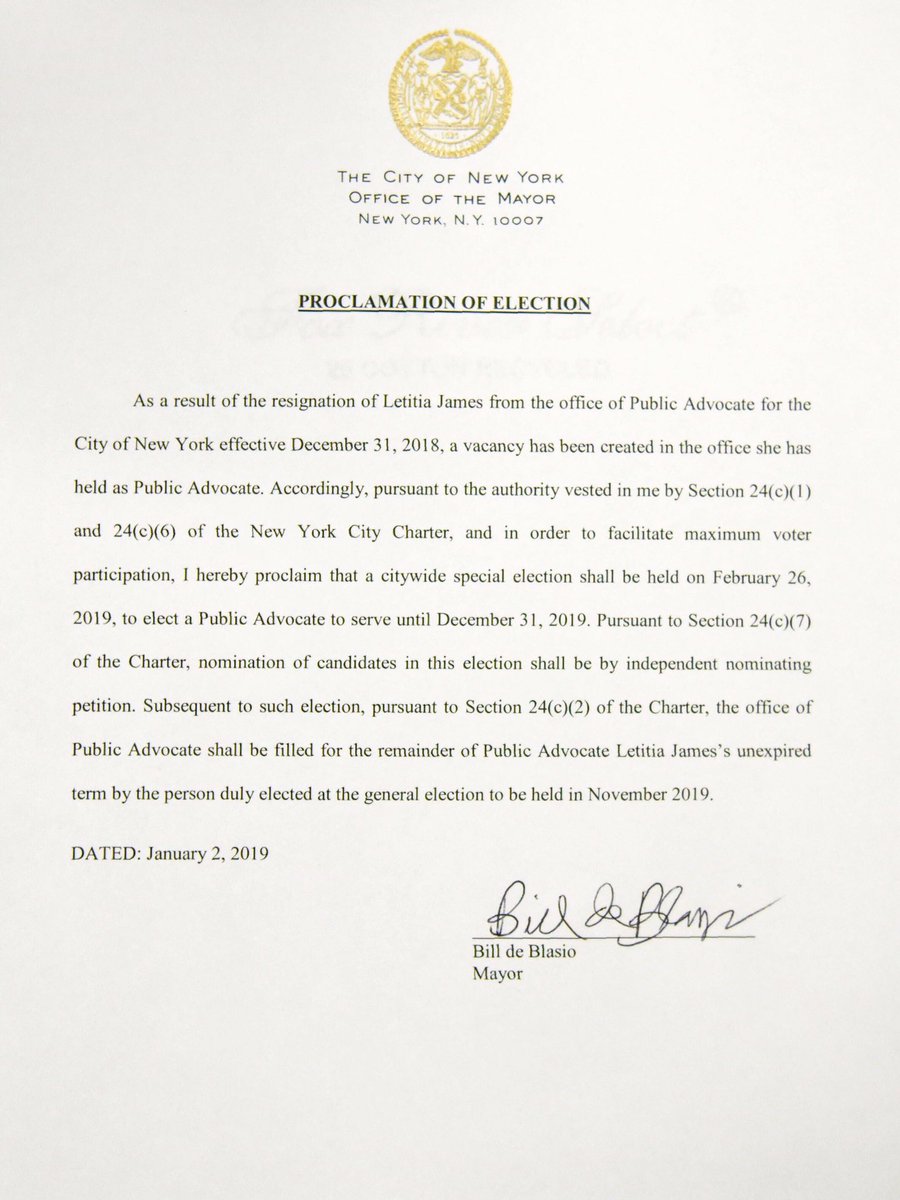