Trump voters are more likely to believe in alien visitation; Clinton voters prefer Socialism to Capitalism. BOSTON, July 9, 2018 /PRNewswire/ — A mid-year Emerson College ePoll finds President Trumps’ Job approval rating at 43% and his disapproval at 50% which is an improvement from January’s Emerson epoll that found the President’s approval at 39% and disapproval at 52%. The President continues to maintain support among the 35-54 age group, a core constituency of his base, with an approval of 51% to 42%. However, his approval ranking is lowest in the Midwest – with 40% approval and 54% disapproval. Are you better or worse off financially than you were two years ago? Emerson College July 2018 National Poll Are you better or worse off financially than you were two years ago? Emerson College July 2018 National Poll The financial situation of voters could be a major reason for the improvement in Trump’s approval rating. When asked if they (voters) were better or worse off financially than they were two years ago 42% responded better off, while 26% said worse off. Males appear to be doing better in a Trump economy than females: 49% of males reported doing better, while 21% said they were doing worse. Alternatively 36% of females reported they were better off, while 30% said they were doing worse. Despite a general positive view of finances among voters and improved approval for the President, the Democrats have extended their lead in a generic Congressional Ballot Test from 45% to 40% in January, to 49% to 42% in the current poll. The Midwest shows an 18 point lead for the generic Democratic candidate, 52% to 34%. The youth vote break for the Democrats by an even larger 24 point margin – 58% to 34%. Enthusiasm for the primaries has increased, with 50% reporting now being very excited, a jump of 10 points from January, when 40% reported being very excited. In both polls, Democrats are slightly more excited than Republicans – currently that gap is 55%-52%. Overall, voters prefer a capitalist economic system over a socialist system 54% to 24%. Party preference shows a clear demarcation on this issue. Those who voted for Hillary Clinton in 2016 support a Socialist economic system 37% to 34%, while those who voted for Trump supported a capitalist system 76% to 9%. The abortion issue appears to be very important in determining how a majority (53%) of voters will cast their ballots in November. The legality of the issue among these voters is not as clear. The survey found that 14% of voters want abortions always to be illegal. 28% believe abortion should be illegal most of the time, but with exceptions, and 34% said abortion should be legal most of the time, but with exceptions. 24% believed abortion should be legal at all the time without exception. Interestingly, Hispanics are most supportive of a total ban of abortions at 30%, with Blacks (14%) and Whites (12%) less supportive. A plurality of voters finds Russia (34%) to be the United States’ biggest foreign adversary, followed by China (21%) and North Korea. However this differs by party affiliation; Democrats reported Russia as the biggest adversary at 49%, Republicans reported China as top adversary at 25%. However, there was consensus among all voters when asked if Russia was a friend or foe to the United States of America: 59% opted for “Foe” and 15% identifying Russia as a “Friend.” The survey also found 59% of voters support legalized Marijuana for private use, with 31% opposing. Thirty-one percent (31%) of those surveyed believe the world has been visited by Aliens. Those who voted for President Trump in 2016 were more likely to believe in alien visitation (38%) than those who voted for Hillary Clinton (25%). Methodology July 6 and 7, registered voters, n=900, mixed mode (IVR/Online), +/- 3.4 percentage points. More available at http://www.emersonpolling.com. Media contact: Cole Mootz 198164@email4pr.com 617-824-3491 SOURCE Emerson College Polling Related Links http://www.emersonpolling.com 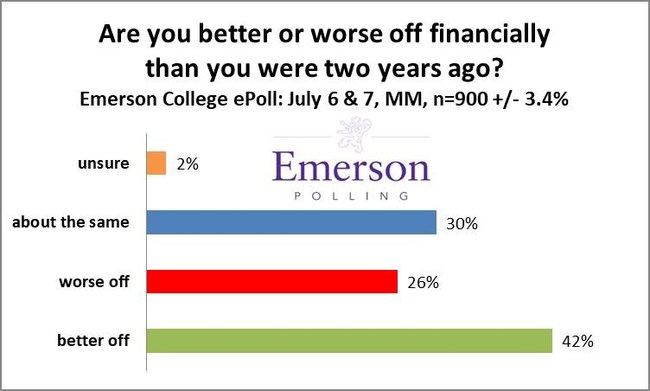