A timely book focusing on Donald Trump as the consummate political leader of ordinary, hard-working individuals of all political stripes.

L. Rowand Archer, in ‘The Trump Effect – Unmasking the Dark-Side Left and Their Liberal Media Parrots’ (Christian Faith Publishing November 20 2018), argues despite this headline becoming more evident every day with Trump’s middleclass policy accomplishments, there seems no limit to the liberal media’s hatred of him and his successes? For Archer, the media’s 90% negative reporting has only gotten worse as Trump successes grow.

However, it may not surprise anyone that this constant demonizing of Trump’s brand of conservatism did not start with his election. As argued in the book it has being gaining ground throughout the history of the socialist movement which is based on the teachings of such socialist as Vladimir Lenin, Saul Alinsky, and Karl Marx.

Archer, along with the cited support from political intellectuals, provides insightful arguments of the profound, widespread damage being left in the wake of the liberal left’s “long march through the culture”.

According to Archer, since that remarkable election night of November 8, 2016, Donald Trump has almost singlehandedly exposed the liberal left and their media parrots as ‘useful idiots’ in the long-term damage they are doing to a confused population and appear prepared to sacrifice the future of the traditional liberal political ideals, an objective free press, and the freedoms and prosperity enjoyed by a society that has granted them the right to destroy free market institutions standing in the way of fulfilling their socialist goals.

Further, Archer argues Trump has exposed the dishonest, self-serving corruption of the political establishment and the money-grubbing elected and bureaucratic swamp dwellers.
With Trump’s election, ordinary folks have experienced a sense of relief and joy, knowing they can again participate in a vibrant business environment which offers the power of self-determination, freedom to pursue their life goals, and the ability to live according to their faith, unencumbered by political correctness and the stifling ideology of creeping socialism.

Most importantly, Archer notes Trump has helped identify the missing component to the impact of the moral vacuum created by the liberal left’s strategy to eliminate values, faith, and civility from the public square. What the U.S. founders understood and George Washington observed in his farewell address to restrain the worst of human nature:
“Of all the dispositions and habits which lead to political prosperity, religion and morality are indispensable supports.”

Available: Online at Amazon, Bares and Nobel, Kindle E-books, and any local book store near you. 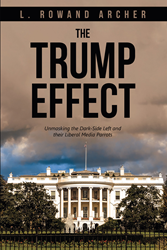